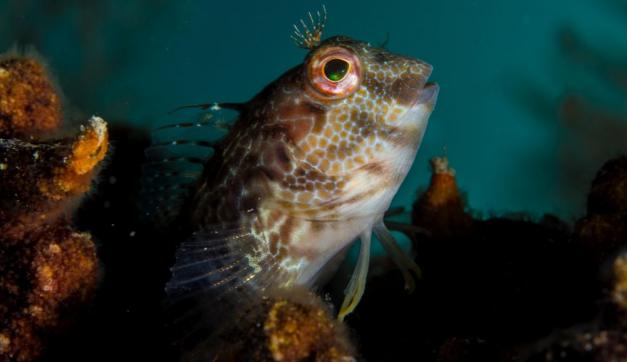 Blennies can be identified by the web-shaped markings under the eyes and head and by the varied coloration that can change in seconds. The species of this family have no scales and are slippery to the touch, which gives their name "Blennius", from the Greek for slime.

One of the most common species of blennies in the Mediterranean is the Parablennius pilicornis, better known by its common name of ringneck blenny. Its most characteristic feature is the set of tentacles branching out from the head and nasal opening.

Where to find it in the Region of Valencia:

It lives in shallow areas exposed to waves, such as jetties and breakwaters. As it does not have a swim bladder, it supports itself on its fins and wriggles along the sea bed.

It can change its colouring in seconds, depending on the type of rocky habitat and vegetation, and even changes according to the fish's mood. Black is a characteristic colour of males in the breeding season.

Divers tend to confuse blennies with gobies, as they are both very common with a very large number of identified species, and look very similar with earthy colours and protruding eyes. One of the best clues to distinguish them is the mouth and dorsal fin. The blenny's upper lip sticks out quite a lot more than the lower one, while the goby's lower lip is the one that protrudes most. The blenny's dorsal fin is unbroken while the goby's looks like it is divided in two. Gobies have disc-shaped fused pelvic fins, whereas blenny have independent ones.