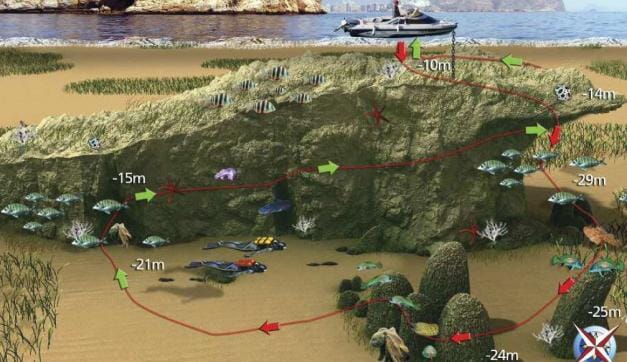 La Llosa is a submerged mountain with its peak some seven metres deep, situated a few hundred metres from the island of Benidorm, to which it bears a strong resemblance in its shape and layout. Its sides drop down steeply to a depth of 30 metres while on the western face the increase in depth is more gradual and gentle in the form of a slope.

The size of La Llosa and its numerous points of interest enable various underwater incursions, and there are at least three anchoring buoys available for boats to moor. On this occasion the one situated furthest north is used and which goes down to the platform, at a depth of some eight metres. If you follow a NE course, a drop appears and pulls you down, combining with the stupendous visibility that is commonly encountered, gliding down to the bottom at a depth of 29 metres. Here a string of large rocks cause a multitude of back lighting eﬀects and harbour abundant life forms of considerable size, like gilt­head seabream, dentex bream, orderly shoals of meagre and white seabream and, more secluded in innumerable holes, large octopus and eye­catching moray eel.

The route, following the southern proﬁle of La Llosa which stays to the right, consists of visiting these colossal rocks. One or two of them have a tunnel through their base, like the Cueva de la Virgen, so when the air or the accumulation of oxygen indicates, move in close to the wall of La Llosa where you will ﬁnd some ﬁssures that may be taken as a reference so as to gradually ascend while the points of interest continue, this time in the form of numerous and colourful nudibranchs or sea­slugs, until you get back to the starting point.