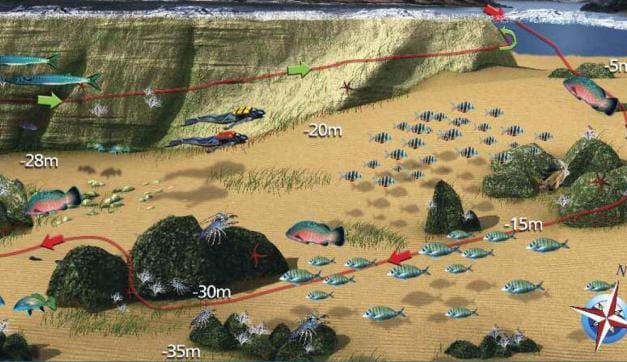 From the anchoring point situated on the bay of the Grossa island, head for the channel between this and the first islet El Mascarat, leading out to the open sea. In order to conserve the air in the tank, it is best to swim to the beginning of the channel so as to go below the surface there, although you must beware of the possible existence of currents outwards, which if very strong it would be advisable not to go out of the inlet. Otherwise, the bottom is found to be quite shallow and in the form of a rocky passageway, with an immediately surprising abundance of life, with the presence of fish such as white seabream, comber, meagre... This well­lit amphitheatre is the prelude to the splendid blue that awaits further on, as you change direction and head south, leaving the walls of the Grossa to the right. Straight away the enormous dusky grouper appear, curious and quiet in the presence of humans and even seeming to pose in front of the cameras. Shooting a quick glance upwards will allow the habitual encounter with serried ranks of barracuda which usually swim around in the area.

At the outset it is a good idea to keep a little distance from the wall so as to start off by exploring the large rocks that adorn the bottom and amongst which it is easy to find the largest lobsters to be seen in the entire Region of Valencia. Below the rocks and at a depth of 35 metres, the bottom starts to be sandy and without much of interest. So then look for the wall and start the return in the opposite direction, keeping the rock face to the left hand side now. The wall seems like a vertical cut covered with colourful algae and sponges, amongst which sea stars and nudibranchs, often commonly referred to as sea­slugs, are found. Gradually reduce the depth as you progress until you reach the entrance channel again, where the excess nitrogen can conveniently be eliminated, admiring this unbeatable natural aquarium, finally returning to the anchoring point.

On this dive it is particularly advisable to go dependent on the depth guage, since the clarity of the water means it is possible to misjudge the depth reached.