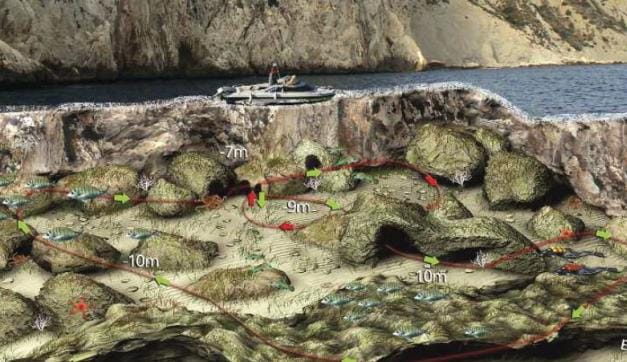 This excellent dive is done on the north face of the Peñón de Ifach and is characterised by a rocky bottom formed by large stones. These are arranged in such a way that they create pretty and curious shapes against the light, although the name The Arches is taken from the arches that have formed in some of these enormous rocks and where undoubtedly, and if the visibility is favourable, the captivating environment that created them will amaze you. The quirky arrangement of the rocks and the multitude of points of interest allow any route to be improvised although, by way of a proposal and if you have anchored in the area of The Arches, as is often the case with the diving centres that come here, you can descend to a seabed about nine metres down to try to gain some depth. You will immediately come across the ﬁrst and largest of the arches, a spectacular gateway to the blue, its roof covered by encrusting gorgonian also known as corky sea ﬁnger or ﬁnger coral, guarded by numerous sentinels in the form of white seabream. If you continue, this bottom, characterised by rocks covered with algae, soon contrasts with another sandy one with occasional scattered rock and crowned with seagrass. Following the proﬁle of the fall of the rock and the sandy bottom you can head for the end of the Peñón (southeast) looking at the pretty balconies the rocks form as they give way to the sand, and then gradually close in seeking the wall of the Peñón.

Then the large rocks will appear again with a multitude of cavities housing moray eel, dusky grouper and meagre. On reaching the wall, you can leave it to the left and continue enjoying this peculiar seabed, to ﬁnally get back to where you have anchored, visiting the other arches that are found at about eight metres practically opposite the one taken as the start of the route.