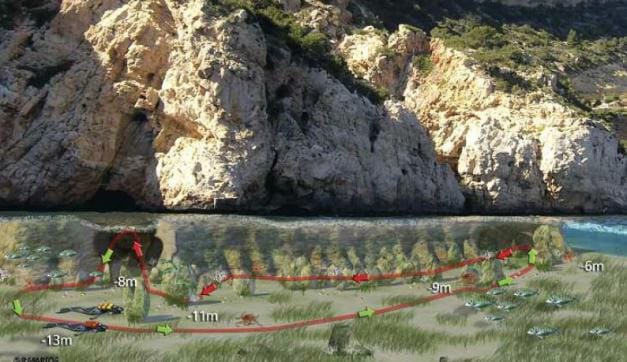 Leaving Xàbia, going south, you come to the small town of El Poble Nou de Benitatxell where you follow the road signs "Cumbres del Sol" , high up on a mountain with spectacular views, where you have to go down a narrow very steep road - watch out for your brakes. As soon as you reach sea level, the entrance to a cave is there on the right, following down some steps. You can put all the gear on outside and, ﬂippers in hand, enter with care, ﬁnding a hole or deep pool some three metres in diameter, where the dive begins.

You drop down into the mouth of the hole and descend vertically for some ﬁve metres, to a rocky seabed which broadens out in relationship to the entrance. From there, kneeling down you will see the only way out of the pool, where the light from the open sea is coming from. Make for the exit, having to pass through a low “cathole” opening of about one metre in height and various metres wide. If there was a high tide in the preceding days, it might be slightly lower due to the accumulation of sand. After travelling a short way ­- some 25 metres in which daylight from the way out is never lost sight of ­- you reach the open sea, where you follow the wall, heading south.

Here, the bottom is dotted with rocks and abounding in patches of seagrass and sandy clearings. After a route of some 10 minutes, the wall goes into the mountain, heading west, and you are almost certain to ﬁnd a thermocline, the result of the meeting of fresh and salt water. If you go up, you will ﬁnd you are in a delightful large cavern, inside the mountain, with light entering through the openings in the roof. From here another cave begins which must not be entered, since it is a long underwater river, extremely diﬃcult, which should only be undertaken by specially trained divers who know the route.

The return consists of retracing the route - the wall now on the left - until you come to the cathole which you came through previously, going up to the surface through the chimney of the deep pool, or else going out by the beach, which is a bit further on. Throughout the route it is possible to encounter moray eel, octopus, peacock wrasse and shoals of white seabream and Salema porgy on a seabed of abundant and luminous seagrass.