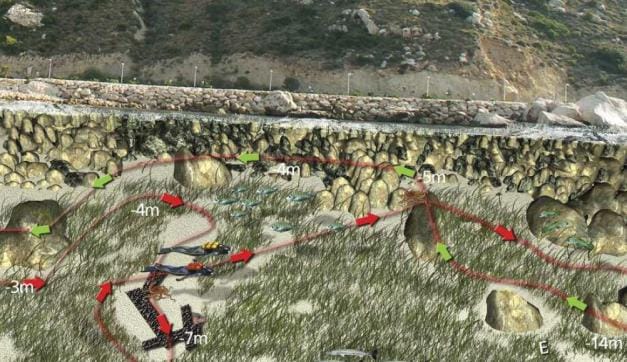 At the foot of the Peñón de Ifach Nature Park, where the footpath starts, El Racó Cove is located, a delightful shingle beach. Its S­SE orientation in the lea of the east winds, and the  exceptional quality of its water, both in visibility and natural life, make it an ideal place for simple dives, which means it is also much frequented by divers who are learning.

Entering the water from the beach and following the wall on the left, on a course of approximately 180°, the seabed is not very deep with rocks proliferating to the left and seagrass meadows of Posidonia oceanica to the right, the bottom gently sloping down to some ﬁve metres. Once a large sandy clearing appears among the seagrass, make for this and follow it, moving away from it to the right, on a course of approximately 220°, where you soon come across the wreck of a ﬁshing boat at about seven metres, and there are often dusky grouper and conger eel. It is worth taking the time to visit the wreck, then return to the wall on the left, and continue heading south until you see that the rocks are tending to disappear and seagrass taking their place. Then move a little to the right until you ﬁnd rocks again, larger this time and more scattered, the depth increasing until you reach a ﬁnal large stone at 14 metres, where you turn around and start heading back. When the rocks start to appear again, on the right this time, swim over them at a depth of between six and three metres where you can amuse yourself in the innumerable crevices and gaps they form, and amongst them the wild life is perhaps less abundant but very colourful, with peacock wrasse, the common two­banded seabream, Tompot blennies, gudgeon, nudibranchs or sea­slugs... ﬁnally ending up back at the starting point.

During the dive, stay alert to look up at the surface from time to time, for you might be lucky and see shoals of barracuda.