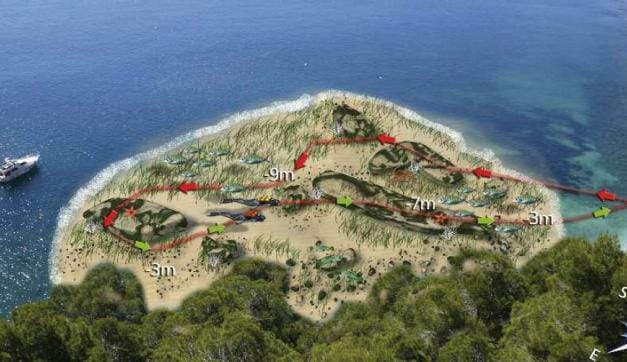 The cove El Tangó, also known as El Pope, oﬀers a good chance for an entertaining and simple dive from the beach.

The cove is very close to the nautical club, beside the outer breakwater of the harbour and with a restaurant opening directly onto it. Its greatest diﬃculty lies precisely in reaching the water with the heavy diving equipment since it has to be carried over some awkward boulders.

The beach faces southeast leaving the wall that ends at the Cape of San Antonio to the northeast. In general, it oﬀers a shallow seabed, lushly covered with seagrass, sandy clearings alternating with blocks or tongues of rock that tend to face south. It is precisely these tongue­like spits that oﬀer the greatest interest, harbouring a multitude of species like the moray eel and the octopus.

Setting out from the beach, make your way for a while on the surface until you reach a bit of depth and on descending carry on towards the southeast until the tongues start to appear, which may be scrutinised with their abundant nooks and crannies. Then gradually move towards the wall of the cape where the already shallow waters become even shallower, where you ﬁnd a seabed of small rocks. Follow the wall and from there return in search of the beach, otherwise you can return retracing the outward route.