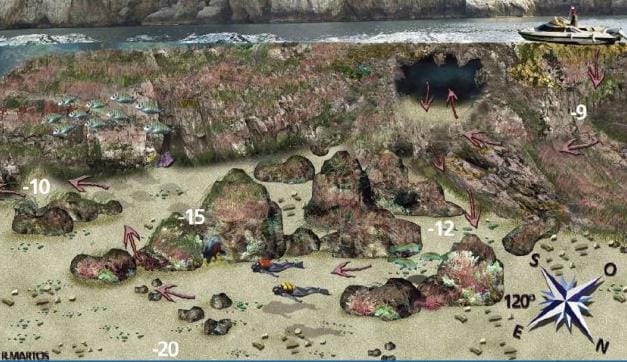 In the incomparable Cape of San Antonio Marine Reserve, and having previously obtained the requisite permit, this interesting dive is proposed, which can be started at a small watercourse along the foot of the cliﬀ in the reserve, at a spot known as La Cullerà for the indentation that appears in its wall [the name is derived from the Italian verb “cradle”]. Descending to the seabed at some nine metres depth and straightaway coming out of the watercourse in the direction of the cape and, following the wall, you ﬁnd the entrance to a large cave where there are often slipper lobsters, meagre and the occasional conger eel. The cave goes back some 50 metres into the mountain although you have to avoid losing the light from the entrance.

Once outside again, continue parallel with the coast and head for the Cape of San Antonio, keeping away from the wall which is of interest for the maximum depth you may want to reach, although between ten and ﬁfteen metres is the most interesting section. It is the typical seabed of this area, formed by large rocks which, covered with red algae and seagrass, are dotted all over a sandy bottom where octopus, gilt­head seabream, elusive dusky grouper and a multitude of meagre can be seen in the innumerable holes oﬀered by the quirky shapes formed by the rock.

The amount of air left will govern when it is time to return to the surface, which can be done putting up the decompression buoy to mark your position for the boatman to pick you up.