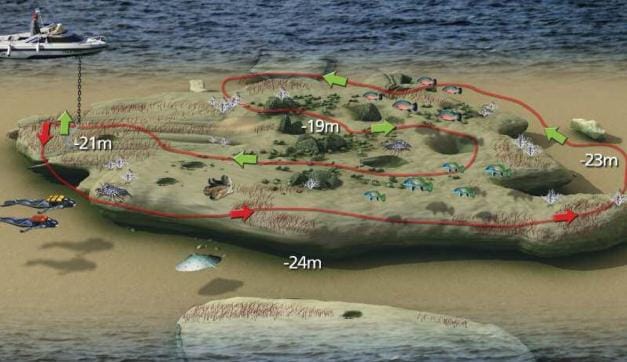 On the coast of Valencia it is possible to experience entertaining dives and, as on this occasion, with a truly surprising abundance of natural life. The common characteristic of the seabed along this coast is the continual presence of sandy substrate which is sometimes dotted with rocky formations like islets or stony tongue­like outcrops which do not usually have variations in depth exceeding three or four metres. Nevertheless, these rocky slabs function like an oasis in the desert, rapidly concentrating a large number of lesser species that find in them a welcome shelter, which in turn attracts the predators. The result is a more or less flat and monotonous seabed, which is more than compensated by all that is found there.

In the case of this dive at Cullera, you will need to get to the diving point by boat, as it is situated a couple of nautical miles from the coast. Once there, go straight down to a rocky bottom at a depth of some 19 metres, over which it is possible to swim until you come to the sand, and then start to go around the rocky platform which, although irregularly shaped, is up to 60 metres across. In the area of transition with the sand, pen shell can be seen and it may even be possible to come across a rayfish, always rather a disquieting experience, while in the innumerable holes and fissures in the rock, lobsters and meagre abound as in few other places, and even the occasional dusky grouper of considerable size. Throughout the route the presence of white gorgonian, also known as sea fan or sea whip, attracts attention and taking a good look you can find some colourful nudibranchs or sea­slugs which feed on it.

Being a flat dive and at a considerable depth, nitrogen will accumulate as rapidly as the air is consumed, so after about 40 minutes a slow ascent must be made by means of the boat’s cable, putting an end to an interesting dive which, if accompanied by good visibility, will surprise with the richness of the seabed at Cullera, one of the largest tourist areas in the province of Valencia.