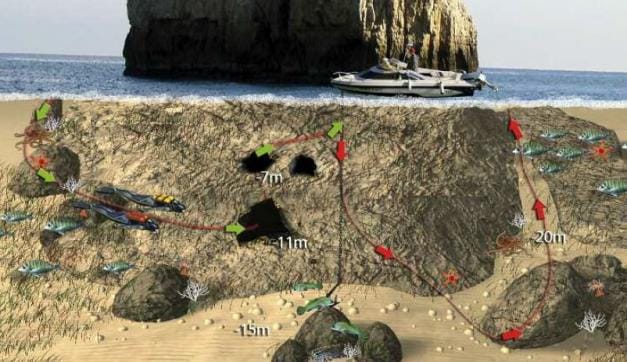 Just past the island of Portixol, heading towards Cabo de la Nao, there is a small islet, La Mona de l'illa, the setting for this new gateway to the blue. The dive consists of going right round it and for that it is best to anchor a little way off, so that if you stay on a bearing of some 120°, on descending by the anchor cable you will probably find the entrance to a small cave, in fact a chimney, starting at a depth of some 11 metres and rising to about seven metres, where there are some openings that create pretty lighting effects. The best thing to do then is to leave going in until the end of the dive and start making the tour of the islet. Its walls slope down progressively and, on other stretches, steeply cut, forming walls full of holes in which there is never any shortage of inhabitants, and it may also be possible to encounter a shoal of barracudas. The bottom is between 15 and 22 metres and is sandy with some large stones rather like a colophon, with a tongue of rock running almost parallel on one stretch of the route, and which can also be explored. Finally returning to the wall of the islet, back to the starting point, it is the moment to go into the chimney, but making sure not to muddy the water with the movement of the flippers, coming out and going back to the anchor.