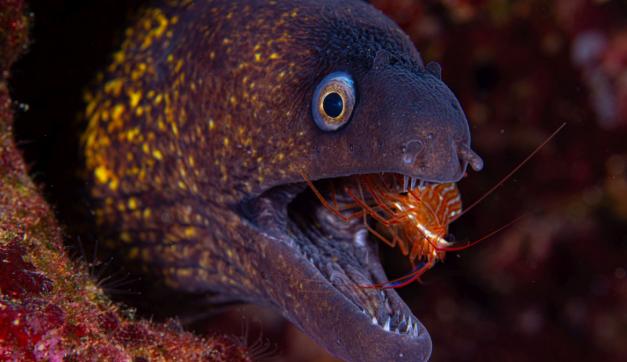 The Moray and the Shrimp

Morays, predators of the night

The moray has many characteristics that set it apart from other bony fishes, such as its long, eel-like body, large mouth and small eyes. It lacks fins apart from one dorsal crest that starts where its head ends. Its body is strongly muscled and flexible, which enables it to swim using a snakelike motion. It has no scales and the thick mucus that covers its skin is toxic in some species, which protects it from aggressors and makes it more hydrodynamic in the water.

The moray is solitary and territorial and lives in rock cavities in the sea bed at up to 100 m. In summer they can be seen near the coast, where they lay their eggs and then return to deeper waters in winter. They are often accompanied by the small Monaco cleaner shrimp (Lysmata seticaudata), which cleans parasites off the morays, congers and blennies that it shelters with.

Morays have limited vision, which they compensate for by having a highly developed sense of smell and a very sensitive lateral line. This makes them extremely effective predators, especially at night. Like groupers, the favourite food of the moray are octopuses, but they also eat fishes, crustaceans and other cephalopods. Groupers and barracudas are among their few known predators.

There are several species of moray in the Mediterranean, but the Muraena helena is the one most commonly seen off the coasts of the Region of Valencia. It is easily identified by its brown skin colour with yellow and black spots, which are more pronounced in adults.

It is nothing unusual for divers to feel threatened when they see morays always displaying their sharp teeth. But in fact, they are only opening and closing their mouths to breathe, as they have to constantly pump water towards the gills located behind their mouth. However, it's better to be safe than sorry, as morays are very territorial fish that attack if they feel threatened or if their poor eyesight leads them to confuse a diver with their prey. If an incautious diver is ever bitten, the potential complications from the wound are not a result of the bite itself, which is not poisonous, but from the infection caused by bacteria in decomposing food inside the moray's mouth.

The moray is the only animal that actively uses a second pair of jaws located further back in the head (pharyngeal jaws) to capture and hold its prey. Its narrow head does not permit it to create the low pressures necessary to suck large prey towards its throat, even less so when it tries to do so inside cracks and cavities. The moray launches the jaws towards its mouth to hold the prey and drag it back inside the throat.

The moray never eats its companion, the cleaner shrimp (Lysmata seticaudata). It remains still until the shrimp has finished its work. Such is the shrimp's enthusiasm for cleaning that if you put a finger close to the hole where it lives, it will analyse you with its antennae and then set about cleaning you of parasites.

The flesh of morays is no longer used in Mediterranean cuisine but it was highly appreciated in ancient Rome, where they were kept in captivity for food and as pets. However, morays are often consumed in the Canary Islands.