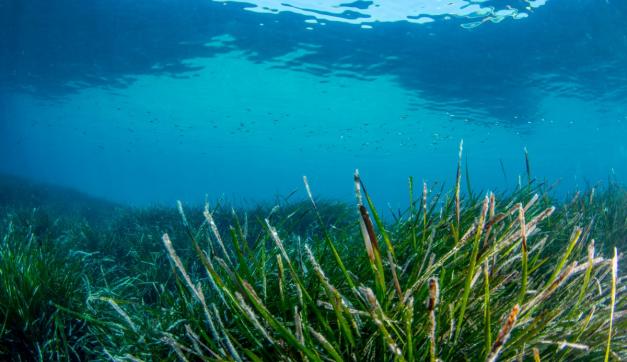 Posidonia oceanica (Neptune grass) is a marine plant that can be found throughout the Mediterranean, where it forms extensive thousand-year-old meadows on sandy bottoms at up to 40 metres in depth. It is a veritable lung of the sea, as it works in much the same way as forests do, oxygenating and filtering coastal waters, improving their quality and transparency, which in turn allows the grass to be home to more than 300 species of flora and 1,000 types of fauna.

This species is also vital in generating and maintaining beaches, as it helps in fixing the sand and reducing coastal erosion. Its importance to the Mediterranean Sea is such that Posidonia oceanica has been included as a high priority habitat in the Habitats Directive of the European Union to safeguard protection of the species.

Like other surface plants, Neptune grass has roots, stems (or rhizomes), leaves and fruit. It is normally found in the form of meadows that cover large stretches of the seabed. The 10-20-millimetre-thick stems grow under the ground and from them sprout green, strip-shaped leaves that are about one centimetre wide and one metre long.

Neptune grass cannot withstand changes of salinity or dirty water and this is one of the main reasons why it is in decline. Other threats are bottom trawling, the inappropriate use of anchors by ships and dredging of the seabed. Posidonia oceanica grows very slowly and cannot always recover from such damage or effectively compete with invasive seaweeds such as Caulerpa cylindracea.

Posidonia oceanica reproduces in a similar fashion to other plants, either by fragmentation and regeneration via the stems or from flowers and fruit (known as the "olive of the sea"). The plant grows most in spring and summer and in autumn the leaves turn brown and are released, later reaching the coast with the tides where they protect the beaches.

Where to find it in the Region of Valencia?

Posidonia oceanica is unevenly distributed along the coast of Valencia, and is more common in the province of Alicante than in Valencia or Castellon. Meadows of Neptune grass are present along practically the entire coast of Alicante, with the exception of Guardamar del Segura, due to the influence of the mouth of the river Segura. Very large areas of grass can be found between Altea and Cabo de Santa Pola, especially the one between Cabo Huertas and Isla de Tabarca (the first Marine Reserve in Spain). You can dive among meadows of Neptune grass in the province of Valencia at Cabo de Cullera, between Tavernes de la Valldigna and Oliva, and in some areas of Sagunto (Pobla de Farnals) and Canet d'en Berenguer. The best-preserved meadows in Castellon are between Alcossebre and Oropesa.