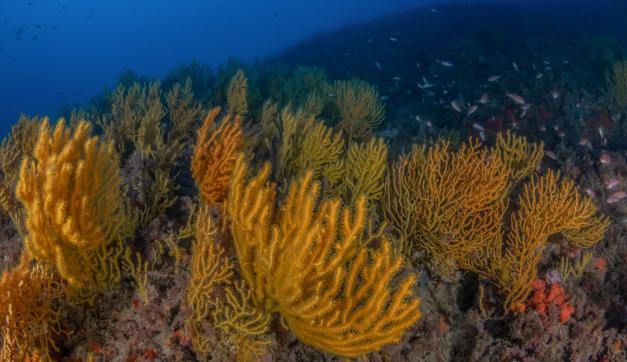 Sea fans belong to the phylum of cnidarians, along with jellyfish, anemones and corals. They are living organisms (warning, they are not plants!!!) that live in colonies and are fixed to the substrate, from where they grow at right angles to water currents to catch food, giving them the shape for which they are named.

Where to find them:

You can see orange and yellow sea fans in the Region of Valencia, where they form extensive colonies of about 30 cm high with long serrated branches. They can be found at 5 metres, in dark rocky areas of the sea bed and in the entrances of caves or cracks, in waters with a lot of food particles in suspension.

Perhaps the most common in the Mediterranean is the white gorgonian, or Eunicella singularis, which offers a branched structure, in the shape of a candelabrum, with vertical cylindrical branches, arranged in parallel, with few secondary branches. The branches are between 3 and 5 mm in diameter, and sleek bright white to greyish white. Its polyps can be transparent if the gorgonian is more than 40 m deep, or brown to greenish, if it is specimens in shallow waters.

Sea fans grow from 1 to 6 millimetres a year, and can reach up to two metres in height and width. Although they are flexible organisms, you should be very careful when you are near them, as they are fragile and one brusque movement with a flipper can destroy years of growth.

The colour variations of sea fans are thought to come from the different types of food in one area or another. The fans absorb pigments from the plankton that they feed off and incorporate them into their structure.