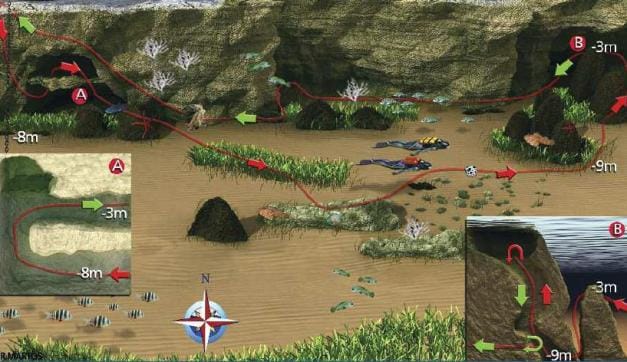 Heading south out of the harbour at Altea, shortly after passing El Albir lighthouse, the wall of the coastline traces a curious form rather like the shape of an elephant’s head, beneath which is found the submerged cave of the same name, although this route continues further on to anchor opposite the entrance to another cave, known as Dwarf’s Cave.

This is not a very deep dive, reaching a maximum of 14 metres and averaging eight metres, but providing an especially delightful circuit due to the pretty caves and chimneys like real windows onto the blue, a constant source of amazement.

As soon as you have descended, look for the wall and at a depth of eight metres is the entrance to the Dwarf’s Cave, of a considerable size, but with little inside. On entering, you can rise to the surface where there is a pocket of air. Go back down just a couple of metres to see an illuminated tunnel indicating the way out through a window, right above the entrance.

Out in the open sea again, the route consists of keeping the wall to the left, which is found to be profusely covered with yellow encrusting sea anemone or sunshine coral [Parazoanthus axinellae]. This wall sometimes forms coves oﬀ to the left, although if you follow the stones that run more or less parallel to it, on a course of some 60°, you reach some cyclopean stones irregularly piled up which can be scrutinised. Then take a course of 330° to the wall where, after being forced to negotiate these enormous rocks and ascending brieﬂy to just three metres, you drop down again to ten metres and gain access to the Elephant Cave, which goes back inside the mountain and allows you to go up to the surface where there is an air pocket. Finally, you descend and go out into the open sea. Returning to the starting point, keep the wall on the right.

Although it is not a complicated dive, it is recommended that you do it with a recognised diving centre that knows the area well. It is important to take into account the possible problems associated with compensation for the rises and falls in depth.