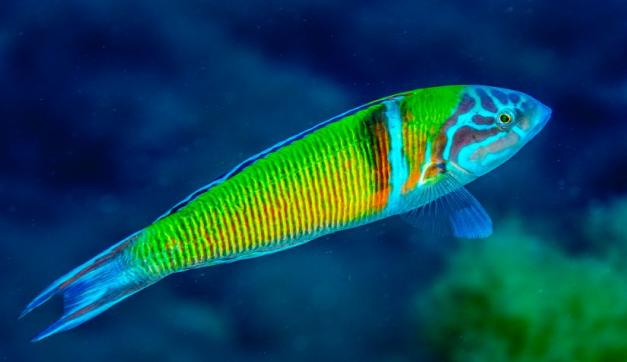 Thalassoma pavo  owes its name to the Greek terms “thalassa” (sea) and “soma” (body) and the Latin adjective “pavo” (associated with beauty).

This striking little fish is a classic of the Mediterranean coast. Its bright green colouring, the blue swirls on its head and the frenetic movement of its pectoral fins make it easy to identify.

Where to find it in the Region of Valencia:

This coastal species is present in the warmest parts of the Mediterranean and lives in shallow areas (up to 20 metres). It can often be seen darting around rocky sea beds or in meadows of Posidonia oceanica. They do not form schools, preferring to live alone or in small groups (especially youngsters).

There is a big difference in colouring between males and females. Females have a more orange colouring with a mottled blue head, and five vertical blue bands on their body. Males are coloured blue-green and their distinguishing mark is two vertical stripes, one red and the other blue, just behind the pectoral fins.