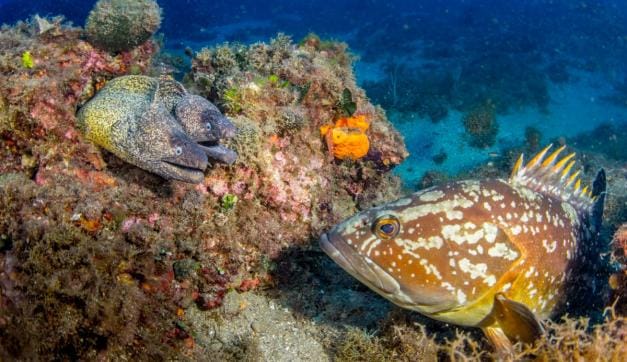 The supreme predator of the Mediterranean seabed

The Epinephelus marginatus, commonly known as dusky grouper, is a very robust bony fish that usually measures about a metre and a half long and weighs about 40 kg. Its shape and size do not allow it to swim very fast or for long distances, which makes it a territorial animal that lives alone, although it shows great interest and curiosity about divers who enter its territory.

They live on rocky sea beds, and are normally to be seen near small caves at between 8 and twenty-five metres, where they find octopuses, their favourite food. They also hunt for other cephalopods, small fishes and crustaceans. Their colouration is brown with white spots all over their body. They have a spiny dorsal fin that they display when they feel threatened.

Where to find them in the Region of Valencia:

A patient diver can easily get close to these curious fish in any of the three marine reserves of the Region of Valencia, at the Isla de Tabarca, the Islas Columbretes or Cabo de San Antonio. Overfishing has led to the grouper being an increasingly rare fish in the Mediterranean. That is why it is essential for divers to act as protectors and guardians and avoid unnecessary interactions that might alter the grouper's habits and make it trust people too much.

The dusky grouper has strong jaws that it uses to extract its victims from their hiding places, while its strong gut muscles enable it to anchor itself to the rocks when danger is near. Its head contains as many bones as there are in the entire human body.

When it is threatened, the grouper also uses its strong gut muscles to anchor itself inside the cave where it normally hides, making it almost impossible to pull it out by force.

Groupers reach maturity at 5 years, and at that age they become females. Some years later they transform into males. A male grouper normally has a harem of about 15 females, and when it dies or disappears, one of the females changes into a male to take charge of the group.

How to distinguish the grouper from other species:

A common mistake made by novice divers is to confuse the dusky grouper (Epinephelus marginatus) with the golden grouper (Epinephelus costae), as both belong to the same family (Epinephelus) and so look and behave in similar ways and often swim together. Golden groupers are slenderer and more streamlined and also smaller and less aggressive than dusky groupers. Golden groupers have diffused golden or whitish bands at the top of the flanks, which are very different from the spots of the dusty grouper. If the fish also has a large yellow spot, then it is a golden grouper in the breeding season.

In the kitchen, the flesh of the dusky grouper is often confused with that of the mako shark and the louvar (Luvarus imperialis) to the point where people believe they are eating the same type of fish, but in fact they are very different species: the louvar is a bony fish while the mako is cartilaginous.