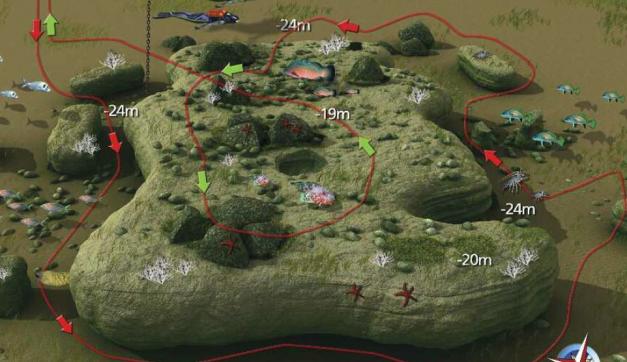 Almost on the outer limits of the Tabarca Marine Reserve, at the GPS point 38°09.231' N 0°25.902' W, the sounding line betrays the presence of a slab of rock, some 50 metres long by some eight metres wide, standing out on the bed of sand at a depth of 25 metres.

Try to descend over this submerged islet, controlling flotation so as not to damage the bottom, and after the  requisite tests you can start out on a simple route around the slab, the highest part of which is at a depth of 19 metres. To start with, make your way around the edge and pay attention to the numerous conglomerations of rock and seagrass surrounding the islet, in which large examples of crustaceans hide themselves, like the slipper lobster and the common lobster, as well as the moray eel and conger eels. After making a first tour around the outside, you can then explore the islet where large sea stars stand out, looking surprisingly colourful when you switch on the flashlight. The impassive red scorpion fish reign majestically in the crevices, perfectly camouflaged with the rock, and fish of considerable size come along continually, like white seabream, agujon needlefish, gilt­head seabream and dusky grouper.

The average depth of the dive will limit the stay to some 40 minutes, charged with intense stimulus to the senses, given the variety and exceptional quality of the life forms to be found.